Kelly is a little modest when it comes to all he has achieved. She is an inspiration to a lot of people. She is a girl on a mission for sure!

I knew I liked her the second she came in the door. I knew she was ready to make a change; a fitness professionals dream come true (the eager ones ready to conquer the world)! I really knew I liked her when she came to the Spartan 1000 Challenge after ONLY 3 weeks with us. We have campers who haven’t done it and they have been with me for 1-2 years.

The Spartan 1000 she did was one I will always remember. She got to 200 burpees and was angry and wanted to quit (her legs were tired). I know what you’re thinking –lol! At that point, I told her to take a break. She has the personality that if she would have quit, she would have been very upset with herself, so I took the chance to have her mad at me. She took the break and then at 270 burpees she fell down. Her legs were TIRED! I looked at her and said “you ok Kelly” and she said yes. She went on to finish 400 burpees and her 1st Spartan! The cute thing about it also, was 2 of the other campers who were done a while back, stayed to cheer her on. She had already made others want to be around her and of course, that is the kind of people who come to Get  a Grip – and Kelly is no exception.

As you will read, she is doing mud races, 5k, ½ marathons, and so much more…who would have thought. I’m SO proud of her and looking forward to seeing what else she can get her hands into.

I have been heavy most of my life and knew that I deserved better but didn’t know how to do it on my own.  I had been struggling with my weight and fitness for years and when I came to Get a Grip in August 2011, I was ready for a change.

I was already down 25 pounds from my highest weight and it had taken me about a year to get there. I knew that if I was to get to where I wanted to be, I had to do something radically different than I had tried in the past.

I started coming to Carrie’s Hardcore Abs classes and once I got to know Carrie’s personality, I was hooked.  She didn’t take herself too seriously but I knew from the first meeting she was serious about what she does and is dedicated to getting results.  After going to the abs class for about 2 weeks, I decided it was time to commit to Bootcamp.

I signed up for a 12 month commitment having never attended one of her camps.  I knew that if had done a month-to-month commitment, I would be more likely to give up.  The first time I went to camp, I thought to myself “What have I gotten into?”  I was so sore that I even emailed Carrie asking if I should come back that Wednesday.  Of course, she said yes and I showed up.  To my surprise, I felt better and wasn’t nearly as sore after camp that night.

It also helped that Carrie was genuinely happy to see me back.  That changed my mind.  I knew if she was happy to see me, she cared enough to help me get the results I wanted and deserved.  Then, I was really hooked.  I guess you could say that’s when I took my first sip of the “Kukuda Coffee”.

Carrie convinced me to do my first Spartan Challenge in September and I haven’t looked back since.

I have lost an additional 26 pounds since I started with Carrie and I have completed 3 more Spartans and a half marathon since I started in September. I am also signed up for 2 more half marathons and a 10 mile race within the next year. I have even had a few people let me know that I have inspired them to start running. It’s still surreal, at times, that people ask me for advice when it comes to fitness and eating well.

The people I have met here are incredible.  They have accepted me as family and I am so thankful for them.  Carrie and I have set goals and I CRUSH them! I never imagined that I would have reached the milestones I have when I started and I am looking forward to what’s in store in 2012! BRING IT ON!!! 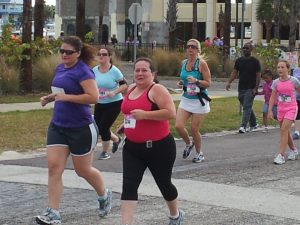 Kelly’s story and determination gives you inspiration to change your life as she has tremendously her own!