Candy is amazing! She started with us and was a complete sponge. She took what we said (preached) and applied it and it showed. She grew stronger very fast and her body got leaner and leaner every week. There is nothing better than someone who comes to us and just trusts in the system and program. When they give in, they find out it works. It takes some people longer due to all the lies/myths, old stories, and misleading information out there, but for Candy she just went with it and it played off two-fold.

We are unable to thank her enough for all she has brought to Get a Grip, the people she has encouraged to join our programs (she too, is a life changer), and for being so supportive to all the rest of the Get a Grip family. Plus, for always letting us talk her into everything we do:-)

She is an amazing lady and we are SO proud of her and all she has accomplished and how she never let’s excuses get in her way.

I came from a family that was not sports oriented at all. I did run track in high school (short distances) but that was about it. I never had any instruction or focus.  When I had my children, I stopped working out all together and started again about 10 years ago. I went to the gym but without a purpose.  I would run 5 K races for cardio and then do weights at the gym but I was not losing weight or getting lean. Everyone had a different opinion on how to do things.  I had always been taught that our metabolism slows with age and “it is what it is”.   I felt like there had to be more to it than that.  I was gaining weight and increasing my clothing sizes slowly and I did not like it. I was not making any progress.

I had heard about “boot camp” type training, but thought it was more for the “fanatics” or military style, yet it was the one thing I had not tried.   I found a Groupon which offered one, purchased it, and sat on it for 4 months before I called.  When I did, a man answered the phone.  He told me he had moved to Texas and I could get a refund through Groupon.  I had visions of this person doing personal training out of his garage and that was not for me.  A few more months passed and I decided to try again.  I found the Get A Grip Groupon for the 21-day Belly Blast.  This time I did my research, and checked out the website, read stories, looked at Carrie’s credentials, and I figured if this one didn’t work nothing would.  I loved the fact that it was both sexes, all ages, shapes, and sizes of people.  Something for everyone.

I was so impressed with the personal touch, the emails provided to keep encouraging me.  I know there are a lot of Grippers, but I felt like I had my own personal trainer just for me (without the huge expense). The daily emails from Carrie in the beginning made all the difference in the world.   I lost 8 pounds and 4 inches in my waist in 8 weeks, and I was hooked!  I joined the monthly membership in October of 2014.   I travel frequently for business, and work a lot of hours, so what makes the Get A Grip challenges so amazing, is that they come not only with a menu/meal plan, but a weekly grocery list, goal sheet, do’s and don’ts etc.  it literally takes the thinking out of it, so it is a huge timesaver for someone like me.  The accountability piece included is key to success for me and so many others.

After only a few months there as a member, I was asked to join the Triathlon Team.  I wrangled with it for at least two weeks before saying yes.  I was at best a weak swimmer, but could not even put my face in the water.  Completing a triathlon was never in my sights before this.  I just didn’t think it was possible.  I originally thought I would do it just to lean out, but didn’t think I could actually complete a race.  Not only did I complete that race, but placed third in my age group and got a medal.   I went on to do 4 more and an additional three as a relay that summer.  Beyond the training, the friendships I developed over that time period are just as precious to me as the physical benefits.

After the Tri training I decided to join the long distance running group and completed my first half marathon in February of this year.  The weather conditions were horrible, but I still finished in 2 hours 31 minutes.  I was sore but felt such a sense of accomplishment. There is nothing like having your own cheer squad when you come through the finish line, no matter what the race is.    Grippers are always there for you!  Now running a 10k is like training for me and I would have never thought I would feel that way.  I always said long distances were not for me. Now, I don’t think twice about it.

I am doing my first duathlon this summer, and have a goal of completing an Olympic distance Tri by next year.  One thing GAG has taught me is that no challenge is insurmountable if you are willing to put in the time and effort.

Carrie truly has a “secret sauce” at Get A Grip that I believe no other place offers.   The physical training, mental attitude/support, nutritional education, and lifestyle coaching are priceless.   I am not only a better person by being a part of our group, but have been an example to my family and friends.   My son trained and ran a half marathon after I did.  My other son competed in some of the Triathlons with me.  There is no greater gift than the gift of health and happiness, and I have been able to pass that along to my family.   My husband followed me around to every Triathlon and quickly became named my “Tri Sherpa”.   I could not have done it without him. He was so impressed by our team, that he joined this year and just completed his first one.

I feel myself get stronger every year.  I see others getting stronger and gaining endurance and that is a motivator as well.  Knowledge truly is power and Get a Grip has given me the knowledge I need to get to that next level.  I am so grateful to Carrie and my Gripper family and hope to still be training with them well into my retirement years! 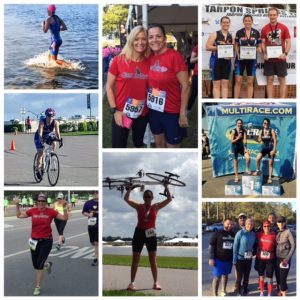 We are excited to see what’s next for her. Check out her awesomeness!