Spotlight Sunday – KC Apple! Not Always just about the Outside!

KC is a true testament to no matter your size you can still be unhealthy. She came to me with lots of questions and was concerned as her doctor was advising her she would have to go on medication if she didn't make some changes. Looking at KC you would NEVER know she wasn't healthy. She looked GREAT! But, being healthy is an inside job, too.

We sat down, set her goals and made her plan. I have to say, she was an easy student (hence why she is a teacher probably). She absorbed everything like a sponge and TOOK ACTION! She brought 200% to boot camp and changed her eating habits immediately. And WOW, she did amazing! As you read in her story below. I really enjoy her and her determination and commitment; she is a great role model to us all!

Carrie’s boot camp has helped me “get a grip” on my life! She has helped me not only become more physically fit, but has improved my overall health as well.

After going for a physical in February, I learned that my cholesterol was 220 and my triglycerides were over 600!  I assumed because I only weighed 125 and ate moderately healthy, that I was in good shape. My doctor informed me of how wrong I was.

In addition, I was told that I needed to make some serious changes. Not only did I need to eat better, but also needed to start exercising! If within six months, I had not lowered my cholesterol, I was going to have to take prescription medication (which is something I did not want to do).

I learned about Carrie through some friends who were already attending her boot camp. I thought that I would give it a try! After one class, I was completely exhausted, but hooked too!

I discussed my health conditions with Carrie and we established some goals that I wanted to achieve.  She set up some nutritional guidelines (even offered to go to the grocery store with me) and helped me to reduce my overall sugar intake.  She explained the importance of drinking LOTS of water and designed a work out that was attainable for my level of fitness.

I started attending the Lutz boot camp on Mondays, Wednesdays, and Saturdays. I followed Carrie’s nutritional advice and increased by water intake. I just had my follow-up appointment with my doctor. I am happy to report that I have not only lost 12 pounds, but most importantly my cholesterol is 166 and my triglycerides are at 137!

Not only do feel better, but  am less stressed, have more energy and am in the best shape ever! 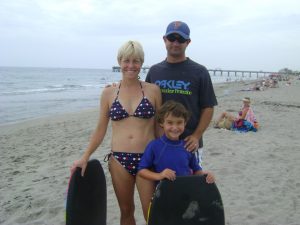 Congratulations KC!!!! You are amazing!