Spotlight Sunday…Andy Kilroy. We Were Unable to Shake Him!

Our Spotlight is our Brandon veteran Andy Kilroy!

I’ll never forget the first day he came to camp. I don’t think he knew what his wife Heather got him into. He was a trooper, but I know it was tough on him. I have to say, I wasn’t sure he was going to come back.

Now, it is almost 2 years for him. Crazy! He always gives 100% at camp and his humor entertains us all. I always smile when I pull into the parking lot and see his car there waiting. He is one of the few men that sticked it out. I’m VERY proud of him and his commitment to himself and the class. Everyone loves Andy! He has leaned out  and has had several GREAT improvements thoughout! My favorite is watching him sprint during the laps, he is determined to kill himself; he’s moving so fast! He has been very committed to attend each boot camp he can whether he wants to be there or not. Camp wouldn’t be the same without him (so hurry back from your work opportunity)!

Here is his story…

I'd been 'in shape' before. During a few magical months back in mid-1998 I was a stallion. I was a student at LSU and religiously worked out at the student recreational center daily for at least 2 hours. Now technically what I was wouldn't be considered, 'in good shape'. I lifted weights and stretched a little. I LOOKED like I was in great shape. If I had to swim across a pool for a million dollars I'd be dead because I didn't have any body fat to help me float and I didn't have enough endurance to swim across my tub at home much less a pool. One day I looked into a mirror and thought to myself, 'this body is unmaintainable'.

For the next 13 years I marched down a steady road of bodily neglect and abuse. I yoyo'd in between months of living off of solely garlic bread and pizza bites and beer then dieting unhealthily. I'd played golf my whole life. It’s certainly a good stretching exercise, and walking is always nice. But let's face it; golfers are about one step up from cardiac stint filled professional bowlers with fingers slippery from cheese pretzels and large chunks of deli meats stuffed with olives.

I started going to boot camp the way many other men did. My wife is the local representative for the women's eternal movement to lose weight that doesn't exist. I of course am the devoted husband who manned and said, 'oh yeah honey… I'll go to that boot camp with you'. I said this mostly because I thought the shock of it to her system would snap her back into coherence and she'd be too catatonic to remember going later.

My first impressions were that this semi-circle of people was going to be about stretching, doing calisthenics and even pushing ourselves to try even (parish the though) some weight training. By the end of the first class I'd not only fallen on my ass (during the warm up mind you) but started to see small parts of my life flash before my eyes. I'd also seriously started to think my wife didn't try to stop me from coming because she knew it'd be a good way to collect on my life insurance. Plenty of witnesses in class make the questioning easy on the widow. I came to think for a moment that the muscular black man standing to the teacher's left was not just a student but her bodyguard. If I hadn't been on my knees half the class begging for the sweet release of death I imagined I could have mustered the strength to launch myself at her neck.

That first day I knew that no matter how much my body ached I had to keep going back to that class. Getting yourself in shape is more than just a promise you make to yourself to fit into a rack of pants that you've never worn but keep because you're too lazy to give them to goodwill. You not only have to want it but in the case of all the people in that class you know that what it does for you is worth more than the pain you experience. Carrie has not only shown me what I can do with my body but that you don't need to have someone in your face yelling at you for you to get it done. Now some people do need that. I don't need that and neither do the people in my class. What we like is to have a sweet dispositioned blond girl telling us things to do which we know our bodies are going to hate us for later. I'm not Freud but even I know if she came to class with a spiked leather collar on no one would even flinch.

Since starting Carrie's classes I've come to appreciate not only hard physical work for my body but I've really seen the results that commitment to yourself can yield. That's how she's turned me from a fat lazy slob into the muscle bound freak you see before you. Unfortunately I'm leaving camp because of a huge work opportunity in a faraway land called Kansas. The thing I worry about most is finding an acceptable substitute for the three hours a week I look forward to and dread the most. I don't think I'll ever be able to find a comparable class. Carrie is the best and after my wife and kitties I'm going to miss class the most. 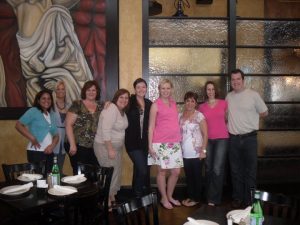 Andy, his wife, and some of Andy's Biggest Fans!

He was man enough to go to a Baby Shower!


Congrats Andy and Hurry back!