Spotlight Sunday…Lyndie House. 2 Years with Get A Grip this Cominig Week!

Lyndie is going on 2 years with Get A Grip! Her commitment to herself, her children and improving their lives, and her friends at boot camp is a true inspiration.

She finally has found what works for her, makes it a priority, and does it well. She not only applies her new found habits (which you'll learn below) but she has 2 children under the age of 10 and implements her healthy habits on them, as well. It is so important to take care of you, but even more important you have all the influence on your children. I hear all the time how mom's go to 3 different drive-thrus for their children because not all children will eat at the same one. Who is in control here? Pleasing your kids is one thing, but feeding them unhealthy is another. Under the age of 10, you still have a TON of control. Take advantage of it! Lyndie has implemented her new habits with her children and in years to come they will thank her.

After having two kids, I had pretty much conceded to mommy jeans, baggy t-shirts and one-piece bathing suits.  I signed up for gym memberships but only went a few times and then I was done.  I tried exercise videos but got bored quickly.  Then one day my friend, Jessica, emailed me about a new boot camp that was starting up.

“Boot camp”:  just the words sounded intimidating to me.  I didn’t want a jazzercise class but I certainly wasn’t looking for a military style boot camp with a drill instructor yelling in my ear.  Luckily, I knew Carrie Kukuda and could not imagine her as a harsh drill instructor.  I emailed her to get a better idea of this crazy class she was starting.  After several emails, she calmed my fears and I decided to give it a try.  I am so glad that I didn’t let the term “boot camp” hold me back.

When I started camp I was unhappy with my weight and was going through a divorce.  I was pretty much at an all-time low.  But with each new goal I accomplished, I gained a little more confidence.  Before long I was looking and feeling great!

Armed with this new found self confidence, I agreed to sign up for a 5k run that Carrie was participating in.  Not only did I finish the race but I completed it in less time than I had hoped.  Since that race one year ago, I have completed two more 5k races, a five mile race & a 15k.  Before boot camp, I would never have considered attempting even a one mile race.

With Carrie’s constant motivation and great accountability from my fellow campers I have been able to stay committed to being fit.  Carrie keeps the boot camps interesting with a wide variety of workouts.  Through her classes and newsletters, I have learned a lot about nutrition and am even seeing my kids start to make better food choices as a result of my example.

I joined the boot camp so that I could lose weight, which I have done, but I have also gained so many things from the camp.  It’s amazing! 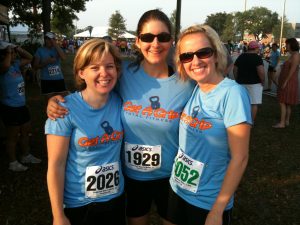 Congrats Lyndie!!!! And Thank you for you 2 year Commitment to yourself and the Get A Grip Family!