Here is another AWESOME spotlight success story. We have a TON of amazing people in your boot camps! I am so proud of them all! Sherri is no exception!

As you’ll read below, she was super excited to come to her first day of camp (lol). But not knowing her, I thought she did awesome! I was crossing my fingers she would stay on board, because with her determination and 200% effort she gave it, I KNEW I could help her. I’m so glad she did, because she has had several milestones and looks GREAT! I look at these guys in class and I’m amazed on how great they look! With true commitment, as Sherri has demonstrated, you can accomplish anything. She is an inspiration to others and I have a feeling her best years are yet to come!

She talks about a lot of things in the end of her success story that really hit home; especially about fun, inspiration, and the “feel good feeling!”

Many people have a moment in their life when they realize they need to make a change for the better.  My moment came the morning after attending a football playoff party.  I couldn’t tell you who won the game but I could tell you all the food that was served at the party because I sampled all of it, at least twice.  I love to eat.  That morning getting on the scale was brutal. As the number on the scale climbed I realized “Wow, I’m 6’ 178 lbs. With these stats, I’m almost as big as some of those professional football players and I am no “Tight End” that’s for sure!”  I was gaining weight, adding extra unwanted curves, uncomfortable in my skin and on prescription medication to control my high blood pressure.  I was forty, flabby and falling apart.  I needed to make a change.

A few days later my friend Jen called to invite me to a bootcamp class.  I was very intimidated by the name.  I didn’t think I could survive a class like that because my exercise routine at the time was non-existent.  I turned her down stating I had just eaten a big bowl of cereal and didn’t think I should be jumping up and down with all that milk and Captain Crunch sloshing around in my belly.  Lame excuse I know.  Fortunately for me, Jen called back two days later and invited me again.  No more excuses this time, I was going to try it.

I picked the right day to start, Fit Test Day!  When everyone in class moaned as Carrie cheerfully said “It’s Fit Test Day!” I thought this can’t be good.  I am never going to make it through class.  I was breathing hard after the warm-up!  We started with a ½ mile run/walk down a street of never ending white mailboxes. Making it back to the studio I discovered there were several more fun timed tests for push-ups, jump squats, plank and an exercise I never heard of called a Burpee.  All the boot campers said that I would love doing them.  They lied!

It was a tough first day but it was a start.  Looking around the room, I watched the other women push through each part of the fit test and the workout that followed.  I was amazed at how strong these women were to be able to do all these exercises and the endurance they had to keep going.  I thought to myself “That’s what I want to be able to do too. I want to be stronger, more fit and healthy.”  Boot camp was definitely working for all these women and Carrie was the reason.

After recovering from my “first day” muscle aches and pains, I was hooked!  I’ve been a boot camper now for 6 months. I have since improved my Fit Test scores substantially, dropped over 20 lbs, smoothed out some unwanted curves and cut my blood pressure meds in half.  I also ran (yes, ran not walked) two 5K races with more planned for the future.

Carrie has really helped me stay committed to being fit.  She is a great motivator who knows how to get results.  Her classes are challenging but fun. Carrie and my fellow boot campers make me want to go to class.  Everyone is so supportive and inspires me to do better.  We all may moan and groan at times but we laugh a lot too. It’s a great atmosphere to workout in.  I always leave feeling better about myself. 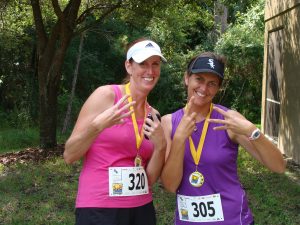