Spotlight…Weight, Back Pain, and now a Triathlete?

by Get a Grip Total Fitness | Random | 0 comments

It’s difficult to talk about these stories of our amazing people, as I am unable to do them justice. Rudy is no exception! Candy, his wife came to us and we loved her and she has made her own success story as well. We secretly wanted the same thing for Rudy; to join us as we knew he was the perfect fit and he’d be in great hands. He is just one of those guys, the second you meet him…you love him. He is going to tell his story and I don’t want to take away his thunder, but I don’t want to go without saying he is a hard worker, dedicated, has huge strength, determination, and heart!

Here is his amazing story…

Carrie said it’s time for me to write my story. I’m really not one of those people that shares a lot but here I go. Once upon a time there was a little boy raised by animals… just kidding.

My story begins in rural Vermont. I grew up on the Canadian border in a vey small town so hockey was a religion during the winter months. I started playing hockey on outdoor rinks about the same time I started walking. It wasn’t until I played high school hockey that we had access to an indoor rink in Quebec. When I wasn’t playing organized hockey, my dad would flood the side lawn and we would play hockey day and night. I was always outdoors, active even during the cold days. During summer months I played baseball and whatever sport happened to be on the agenda for that day. During my school years, I continued to play hockey in the winter, soccer in the fall, baseball in the spring and usually attended a hockey camps during the summer. A knee injury during my senior year of high school squashed any hope of a soccer or hockey scholarship to college. Not having many other options, I joined the Army.

I blew through boot camp since I was in such great shape and Military Police training was a breeze. After my tour in the Army, I joined the local police department in Vermont and went to the police academy. Again, other than the academic part I blew through the physical training. When I left the Army and joined the police department, I weighed around 210lbs. and was in the best shape of my life.

Then, life set in. Eating poorly, poor sleeping habits, shift work and stress all came together and my weight began to slowly creep up. After 10 years of law enforcement, we decided to move to warmer waters and moved to Florida. I had to reinvent myself as I didn’t want to stay in law enforcement and ended up working Insurance, sitting behind a desk. As the promotions came, so did the stress, long hours and continued weight gain. I joined an adult hockey league and played for several years but never really felt good as I was still not eating all that well, managing stress or exercising regularly. I tried the gym scene, but never got into a routine or was given any support except that from my wife.

Then, the back issues began to arise and eventually severely hindered most of my activities. I was inactive, somewhat depressed and feeling old. I had to stop playing hockey and that’s when the weight began to pile on. I again tried joining a gym, but struggled to maintain any routine.

Then, my wife joined the place called “Get A Grip Total Fitness” and was going to train for triathlons as well. I didn’t know much at all about Triathlons, but thought it was great she was doing it. She also began the boot camps, eating really well and I noticed the difference. She was looking fantastic! I began eating some of the food from the menus Carrie provided and was impressed.

When she attended her first triathlon, I walked around the area and was quickly caught up in the excitement. When I saw an elderly couple exit the water after their swim, I thought to myself “if they can do this, so can I”. But, I didn’t have the nerve to approach Carrie and say “I’m in”.

But, Carrie noticed my interest and gingerly suggested (I’m being sarcastic here) that I join the next tri training session. After a few more gentle nudges from Carrie, I signed up.

This was the beginning of the new me. During the 12-week training, Carrie encouraged me, taught me and gave me the confidence to do my first triathlon in 2016. As I approached the end of the race, and being the very last person in I was embarrassed and felt kind of down. But, a fellow triathlete Ian Brown came out to meet me and encourage me to “run it in”. As I approached the finish line, I saw (and heard) many fellow Grippers waiting there for me to finish. As I got close to the finish line, Carries husband John walked out to me a gave me a big high-five and said “you got this”. I’m sure many didn’t notice, but I had tears in my eyes when I crossed the finish line. This was a vey emotional time for me. All I wanted to do was hug my wife, and then Carrie for making all this happen. I did three more triathlons during the year, began eating better, dieted and dropped tons of weight.

I don’t volunteer this information to many but I got to 268 pounds before I started with Carrie. I really hated the way I looked and felt. I am now down to 229 pounds. Other than the persistent back issues, I feel great. I have more energy, confidence and the knowledge to live a healthier lifestyle.

Being part of Get A Grip is so much more than belonging to a gym. It’s a group of people that support each other, encourage each other and often tease each other, just like a family. This is all possible because of the leadership from Carrie.

Thanks to Carrie, and the entire GAG family. 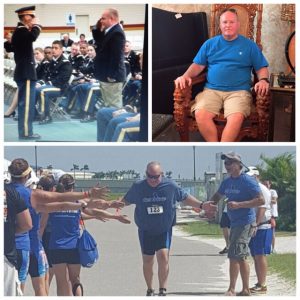 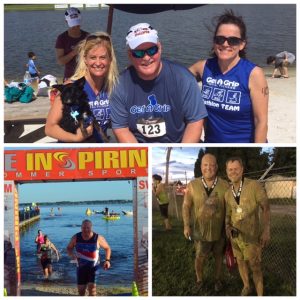 Think about it…back trouble, a little bit of depression, & weight climbing and NOW losing 39lbs., becoming a triathlete, and loving life! He speaks of…Anything is Possible!

I am SO proud of him and I’m super excited to see what 2017 brings him! I know he’ll be doing the Triathlon Training for sure!

Thank you for sharing your story with us, Rudy! Hugs!